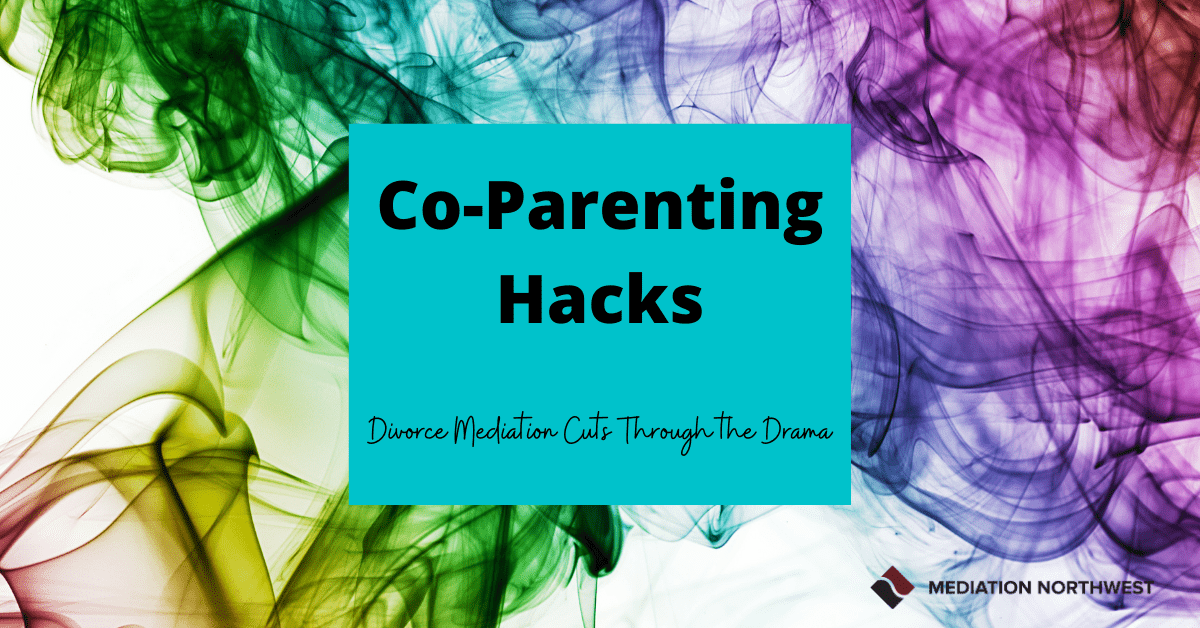 I know a lot of co-parenting hacks because I’ve been a divorce mediator for over twenty years and I am also a co-parent. Keep reading for concrete steps help you navigate co-parenting like a rock star.

Shared Calendar. In my marriage, I was better at organizing the kids’ events than my former spouse. So, when we moved into a co-parenting relationship, I didn’t expect him to instantly become good at something he rarely did. Instead, I set him up for success and showed him how to use the shared calendar. He wasn’t great at knowing this stuff before, but now, with the shared calendar, he is the understudy to the rock star. I used a Google calendar, but you can use any shared calendar.

Shared Expense Spreadsheet. In my marriage, I also was the primary spender for the kids. That didn’t change much after the divorce, either. The best way I found to request reimbursement from my co-parent was to create a shared spreadsheet. Each month, we each add expenses to the spreadsheet. Then, at the end of each month, the spreadsheet shows who owes money to whom. It took the drama out of the request for reimbursement. Click here for the spreadsheet that I use for myself and that I suggest that my clients use, too.

Ask, Don’t Tell. When communicating a co-parenting switch, don’t tell the other parent it is happening. Instead, communicate the problem and then ask if the other parent is willing to switch. I routinely have clients say to me, “I didn’t care if s/he wanted to switch weekends. I was angry that s/he TOLD me it was happening and didn’t ASK me. I am no longer married. I don’t have to do what s/he wants.” So, if your goal is to get a change to the parenting plan, ask… don’t tell.

Tone and Sarcasm and Threats, Oh My! You know what isn’t helpful when communicating to your co-parent: using tone, sarcasm, threats, cussing, and passive aggressive communication. Don’t get me wrong, I can cuss like a sailor, but every communication style has its place. Cussing when negotiating about your kids isn’t the time. It (almost) goes without saying that using tone, threats, or being passive aggressive doesn’t work, either. Name me a time it worked with your co-parent. I’ll wait… It has never worked, has it? And… it usually escalates the situation creating more drama than you intended. So, communication in the most neutral way possible. Leave out the name calling, the adjectives, the blaming, the threats, and any other colorful words. You have two goals: (1) for your kids to have the best experience with both parents, and (2) solve a problem that you are communicating to your co-parent. To that end, you need to communicate to your co-parent as clearly and neutrally as possible without tone, threats, cussing, sarcasm, or passive aggressive comments. Otherwise, the other parent will understandably be angry and the kids will experience unnecessary drama. If all else fails, you may need to schedule a session with a mediator.

Ghosting and Bombing. If you and your co-parent have engaged in ghosting (i.e. ignoring and failing to respond to texts or calls) or bombing (i.e. repeated calls or texts), then you may need to find a good mediator to help you through the problem. Most likely, one person isn’t getting his/her needs met. The questions then become: (1) is the co-parent’s need a reasonable need? (2) what solutions exist that both parties can live with? In short, don’t ghost your co-parent or bomb your co-parent. It isn’t effective and never once have I heard that either behavior solved the problem. If you are experiencing this problem and you can’t communicate in a healthy way with your co-parent, it’s time to call the mediator.

Schedule a Consult with Julie

6 mistakes to avoid when dividing-up retirement in a divorce

How to get my partner to agree to divorce mediation

I’m Retired and Getting A Divorce: What Do I Need To Know